Six hours and five black bear encounters later we found ourselves closing in on the Gravel Springs Shelter. Penguin had told me about his thru hiker friends that he had met before reaching the Shenandoahs and how most decided to “aqua-blaze”; skipping the National Park entirely and renting canoes/ kayaks from Waynesboro to Front Royal. I had figured he had wanted to reunite with them in or around Front Royal. So we blew past the shelter onward and I got a taste of night hiking in search for a “stealth site“; a camp location that is not designated and is typically frowned upon by park authorities for various safety reasons. “Everyone stealths” Penguin said. Our LED headlamps lit an elliptical ray of light on the rocky trail ahead. Bats swooped down, near to our heads, scooping up insects in eerie silence. Soon a quarter moon appeared in the western sky illuminating silhouettes of neighboring ridges. We came upon a breathtaking western vista called South Marshall Mountain and saw flashes of leftover fireworks across the entire landscape. We figured that a majority of the firework celebrations were postponed to the prior night’s rain and intense fog so we each grabbed a boulder for a free show. At 4500 feet several glistening communities, like Bentonville and Southern portions of Front Royal, could be seen in the night. The “boom” from the furthest fireworks display took nearly twenty seconds to reach us from our high perch. The disconnection between the light and sound was so extreme that the two seemed unrelated and didn’t share the same source. The area offered great views but not a great place to set up camp, so we continued on into the night.

It was 10:30 pm and we had reached North Marshall mountain with an equal experience to his younger brother, South Marshall. There was some clearing of the understory, a man made fire pit and a what we had hoped for a great morning vista. I couldn’t get comfortable that night; perpetual tossing and turning that left me frustrated and more sleep deprived. I had a history of insomnia since college and I envied those who could fall asleep at the drop of a hat on any surface, anywhere. I never had that luxury and I thought about the comforts a warm, soft bed at home with every turn. Before I knew it, the sky slowly became filled with light and the birds started calling. I looked at my watch; it was 5:45. I knew we had another 20 miler ahead of us but thought to myself, “maybe I can squeeze and hour or two.” It was at that moment that I heard a small rumble. Shortly after I heard Penguin say “you up?” “Yup” I replied. “Looks like we got about a half an hour or so before a storm.” he stated. “Dammit” I thought to myself. I wasn’t afraid of myself getting wet but my backpack was a different story. It was a pack I bought at a local pawn shop for a reasonable price. After all, It had endured a month of back backing hostel to hostel in Switzerland and Italy but wasn’t designed to be put through the riggers of a full week of camping and being stuffed full with 35 pounds of equipment. The “rain guard” was just big enough to cover the pack by itself and not for an additional tent, sleeping pad and water bottles that hung clinging to the outside shell. So I wasn’t ready for a down pour, but out here you’re at the mercy of whatever mother nature throws at you, whether you are in the mood for it or not. So we packed up camp and I futilely attempted to cover my bag with the cover and a “poncho” that was simply a trash bag with two arm holes and a hood. “No matter how hard you try, out here you’re going to get wet.“ Penguin said. And so the rain came right as we were leaving and the sound of the rain on the overstory trees was deafening. Claps of lighting and thunder occurred in the distance as we scooted along the forest floor. We walked for a few miles when the rain started to taper off. When the sky lightened up, I exfoliated my make shift rain cover and packed it away. Before exiting the northern portion of the Shenandoah’s, we walked through several acres of fire ravaged forest. I could still catch a faint whiff of ashy smoke in the air. We had approached an older gentleman who was weed wacking the trail among the rain drops and it was there I asked about the fire. He had said that an adjacent farmer had burned a brush pile which had spread to the forest that past January. “January?!” I thought to myself. Surprised because I had recalled moments before when walking through the scarred section of forest that, though the recent devastation, there where several seedlings and native sages already emerging from the desolate ground as a way to heal itself. 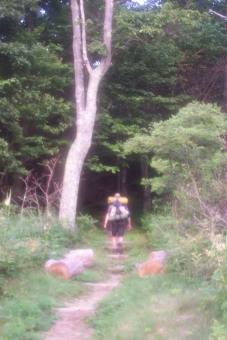 From there we had set a destination for the Tom Floyd Wayside, to restock, grab a “trail crave” item like a Coke or a donut. And that’s the thing; I normally don’t drink soft drinks or eat donuts but after a couple 15+ mile days, they all sound fantastic. Someone my size hiking 20 miles can burn in excess of 4500 calories a day, so the body is looking to recharge itself with all sorts of fuel. We exited the park and descended to the area we thought was the wayside, however we were a little perplexed at the sight of a lonely shelter and privy. “What the hell is this?” I exclaimed. Apparently this is someone’s version of a wayside, not like the others, with their cold drinks, hot eats and grandparents and grandkids outside licking ice cream and laughing, which is what I had fantasized for miles. No coke, no donut. And its not like we were going to die of starvation or dehydration but it was a stop we had looked forward to on a hot muggy day. I was running low on water and noticed a sign that pointed toward a spring. As Penguin took a seat in the shelter I continued walking down a path to the water source. The path switched backed several times as I descended further into the valley. About half way down the hillside I heard a rustling in the adjacent brush and to my surprise saw a small black bear cub. I was somewhat desensitized of the initial shock of the sight after seeing nearly a half a dozen bears over the last two days. Then I thought to myself “Cub…….momma” And it was at that moment that I heard an even more intense rustling beyond the young bear. “okie dokie, screw the water.” and I slowly back stepped, turned around and quietly returned up to the shelter, waterless. It was 10:30 and we had already hiked 8 miles with another 9 to go to the next Shelter.

One thought on “Lightning, trails and bears”