Odile Decq began practicing in Paris, directly out of school, thirty-three years ago. Her first work that caught my eye had blood orange ribbons flowing through antique spaces. That is, the restaurant renovation of the l’opera restaurant in Paris. I found facades that fold back into the earth in Austria. Two newer projects host beating hearts in the expansive spaces of art museums. The orange theaters hold the place where thoughts are shared; the hearts (of all things central to a building) are suspended to create a place where ideas must be shared to live.

The (Phantom) l’opera restaurant in Paris. Photo on designboom here

“…practicing architecture is really complicated and it’s very hard, but it’s possible. I discovered early on that to be an architect you have to have a little bit of talent and a maximum of determination and not focus on the complications.” 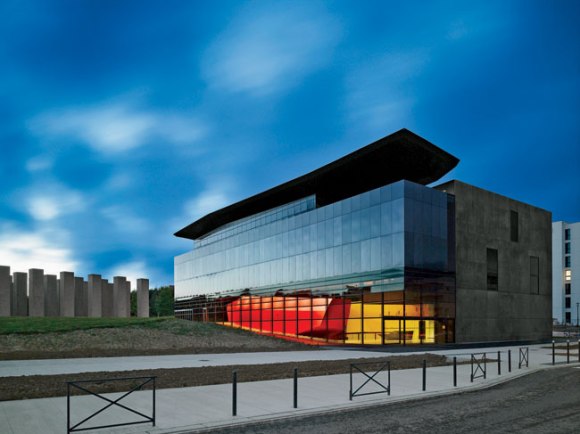 Taken from the architect’s site:

The Liaunig Collection Museum reinterprets the dual idea, apparently in contradictions of the conxtextual inscription and the immaterial escaping, of natural and artificial, heavy and light, shadow and light.

Between the site and the museum no one is before the other. Their interaction defines the exhibition promenade. Nevertheless, the museum is distinct from the slop by its artificiality and its porosity clearly seen through the interstices in between the curved lines.
The envelopp of the museum finds its origin in the slop itself by its pleats and drapes in softly sinuous tension.

Lifted up, the curves of the slop are re-interpreted in volumes. Compressed, twisted and redevelopped they re-constitute the idea of a belvedere looking toward the valley, the village and the castle. Forward, the lines of the museum and the lines of the park are prolonged and blended, increasing the perception of a landscape museum.

The walk through the building becomes a sequential discovery, an event.
In the landscape around, the sinuous roads take the topography into account and every travel is a scenic discovery. In the museum every space is conceived to lead the visitors to move, to travel through the building, to experiment the art exhibitions.
Spaces are never centered. The inside space is not static but dynamic and gives to the visitors the attractivity of a constant discovery.

A sinuous ditch in the middle of the park re-orientates the ondulations of the park territory. A path is turning all around it and on its way, three belvederes are looking to the Drau below. The Artist Residence is ‘the house in the trees’ above the Drau. Three free black cubes spreaded in the park will be developped by individual artists.