With his hands behind his back Gabrielle led us into the old church of San Gabriele. The church was baby blue, with understated, intimate vaulted ceilings for an Italian cathedral. San Gabrielle was the patron saint of youth and in the atrium to this old church there was a stairway that led to the museum above celebrating the young 24-year-old saint, Gabrielle. We would enjoy mass in the new much more modern church momentarily.

Case per Vacanza photo above

Beneath the sanctuary of the new church a life-like model of San Gabrielle laid in a glass casket. Three sides of it were surrounded by a few pews for praying. We were in silence then for a while when Gabrielle again told us that mass was starting. Above us, in a very large contemporary church, the congregation was filing in and we found a place in the front row for all eight of us. Mass began and I was enamored by the crucifix mosaics that flanked either side of the altar. Again, it was difficult to decipher much more than the rhythm of mass. Communion was a free-for-all once again as was the exiting at the close of mass. We took a photo and then decided it was time to go back to Giulianova. 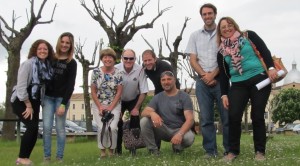