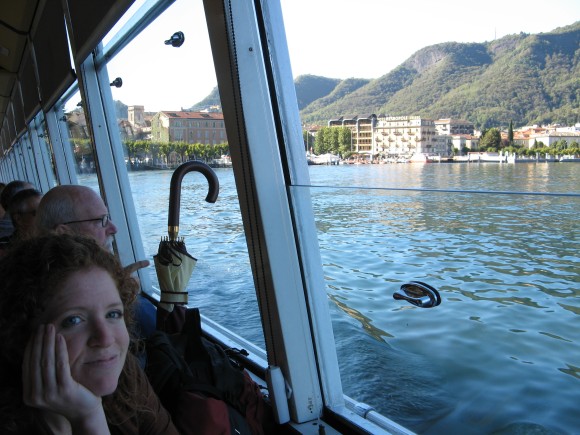 Day 10, the day we slowly went around Villa Balbianello castle, the beautiful garden that held the wedding between Anakin and Padme. I’ve heard the expensive silk sheets were too rough to sleep in, but were so beautiful. It was my favorite Sunday so far -the crisp waves, bright lake, glow of our faces against the reflective water.We toured the lake of Northern Italy, experiencing Como from a slow paddle pace. We crossed the big body going North for a few hours. Vorrei due biglietti per la Menaggio. 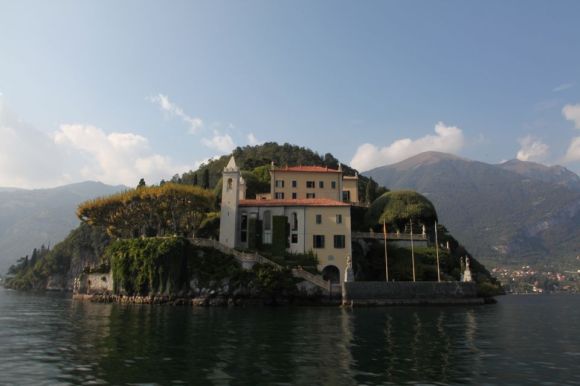 (I hadn’t seen episode two of Star Wars, I’m afraid to admit… but was quickly given a lesson and prompted to learn more about the Star Wars tours starting here.)

You must live in Italy and not learn it from burying your nose in books. We tried ordering parts of a meal at different places, appetizers, drinks, desserts, more drinks just to talk. We’d tried to find places by asking for directions and I felt so proud of myself for asking and receiving an answer. An answer that Phil could understand better than I could. I began to realize how we depended on one another in understanding what we were going through and how it took different personalities to understand feeling what was going on around us.

So we rode the water, it was a cool fall day outside. Phil meandered from our booth to the outside deck and back while I drew trying to understand shade, detail and overall scene. Phil and I drew together. Near the end of our trip north we watched people run off at Cavatca. Lots of people got off the boat at Bellagio. Fashion so far had been a flashback of the American 80’s –hightop pink sneakers, stir-up pants with heels… seriously?

Italy in Como was more globalized since I was here last. Como wasn’t a place for guests, that was for the northern parts of the lake. At the Menaggio port we took lunch –two wines, due biletti del vino, una pizza with tuna salads. On this part of the lake a lot of people were out on their motorcycles. The hotels against the water ave gorgeous interiors by what we could see through into the tall glass windows. Lots of tight panted, lacy topped women with scarves and dogs were walking around. We found our hostel, La Primula,  accommodations but everyone was breaking for the afternoon so we left our things to come back later. Josh from Australia was sitting with his laptop on the porch waiting for a friend, Stephanie, to show up. 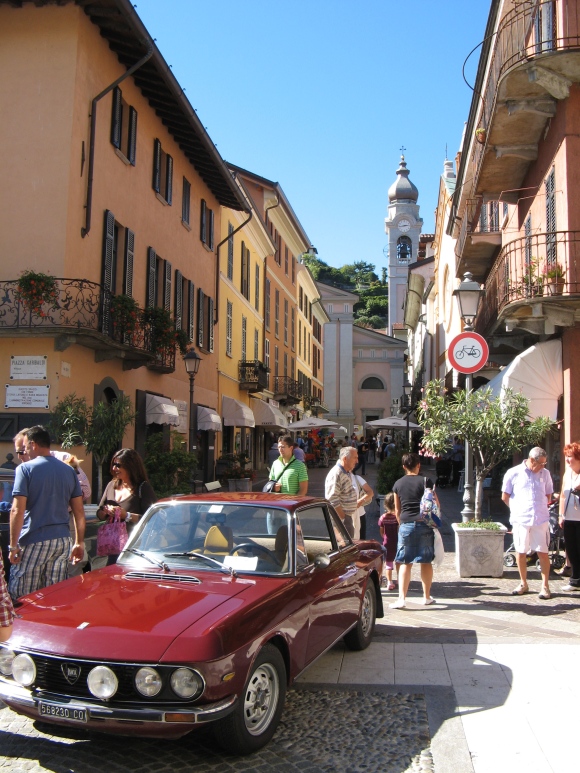 Phil and I walked around Menaggio.  We came across a vintage car show and I studied the  curtain dressing on the exterior of the buildings. Then we took a boat to Bellagio.

There is a campus there and a highly recommended place to eat at in a cove of the northern lake. Bellagio sits on a peninsula into the lake. Apparently this area was for affluent Italians or other world travelers looking to escape into the hidden mountains, the Dolomites.

There are two main thoroughfares to Bellagio –one by the lake and the second up many stairs. Most of the peninsula was private for the residents’  gardens of rosemary, kiwi and figs. We sat beneath a metal canopy –Carlsberg, and had coffee laced with Amaretto to watch children run around recklessly. We ran up and down the streets steps, finding a new shop at nearly every stair. Some two-table cafes or wine shops had tables straddling the stairs by way of a home-made platform. Phil bought a cap in one of the shops. We roamed for a while, glad to be warm, alone and without a plan. I found a skirt I liked and wanted to mimic some day. I took a picture while we were waiting to board the boat back to Menaggio and embarrassed Phil when the flash went off. 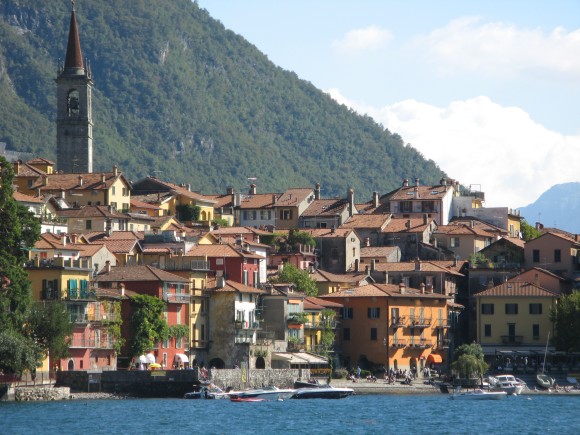 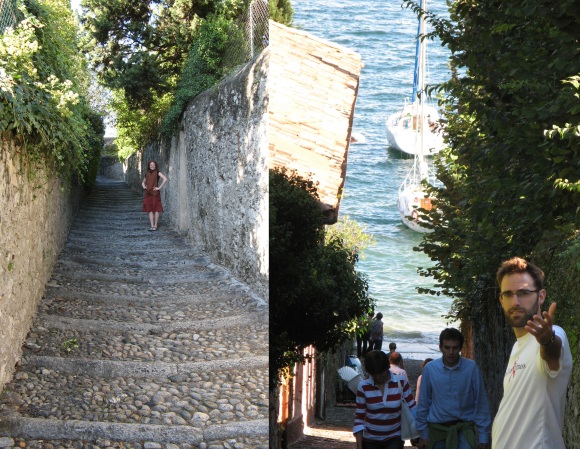 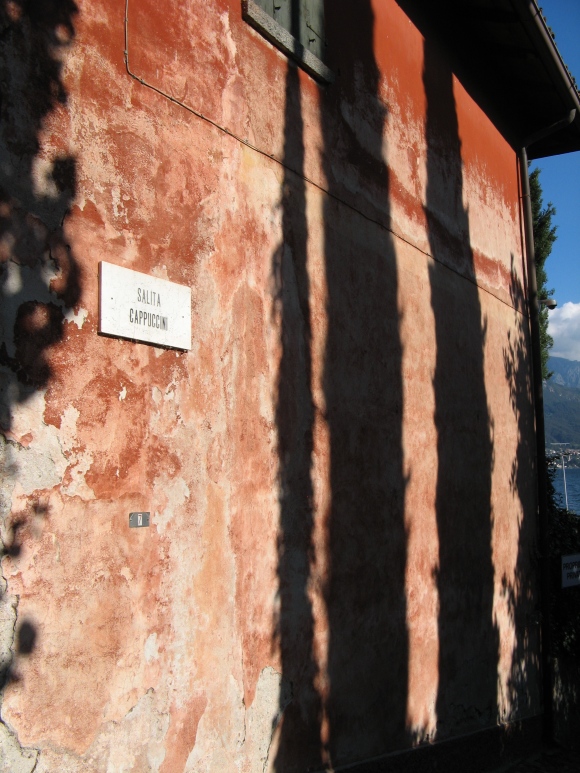 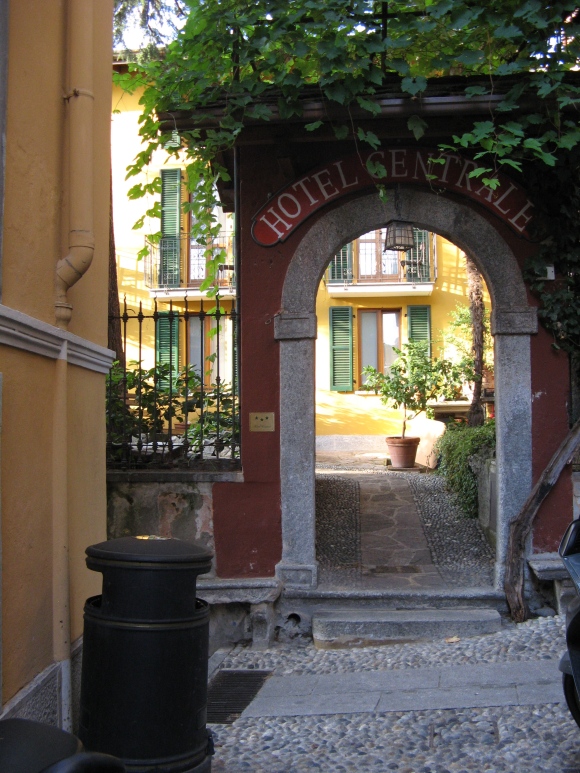 It seemed like someone could make enough money in a summer to support themselves the rest of the year. Bellagio had the strictest of historical renovation standards –the look of it’s main street –it’s face, could not change at all.

Italy had intrigue in the structure of the streets, shops and residences. Not only was the language a barrier but cragged mazes, steep cliffs into the water, walls of billowing curtains to keep out the sun, walled gardens of stone, canopies of trees over paths leading only to the water, a boat and one residence. The sky was turning purple on our way back home. From here we could see our steep hike planned for tomorrow. 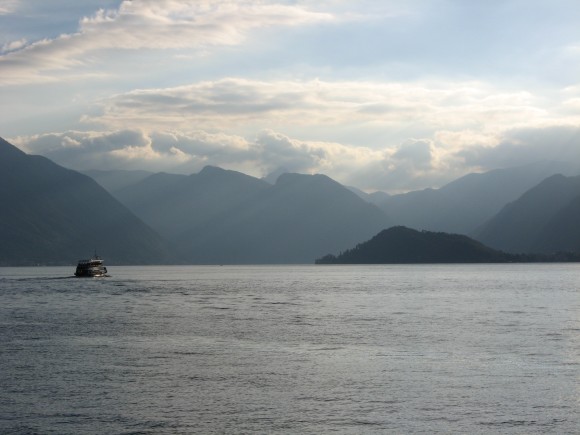