for out next event featuring sculptor, Eric Price.

Eric specializes in both realistic and caricature creations.

hand built sculptures for his clients.

Please stop by our gallery for a reception and an opportunity 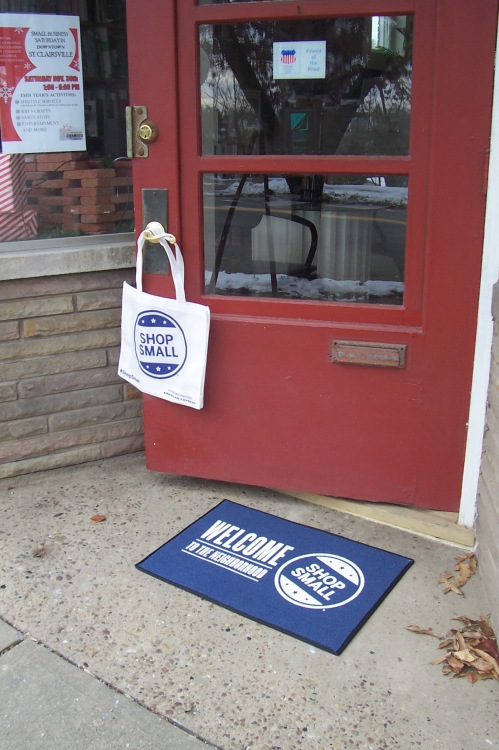 St. Clairsville Chamber of Commerce did a great job of promoting the small businesses along Rt 40 in our historic downtown for small business Saturday.

Their site directed shoppers to all of the participating businesses, which each had these coordinating door mats so that the town was visually linked for all participants.

Enjoy local shopping for the rest of the season.

Support Small Business Saturday this Saturday November 30th
Artworks from the four founding artists, Andrew & Patricia Croft and
Ben & Melanie Steffl-Thompson will be on display.
The Main Street Gallery will be open from noon to 6pm.
Hope to see you there! 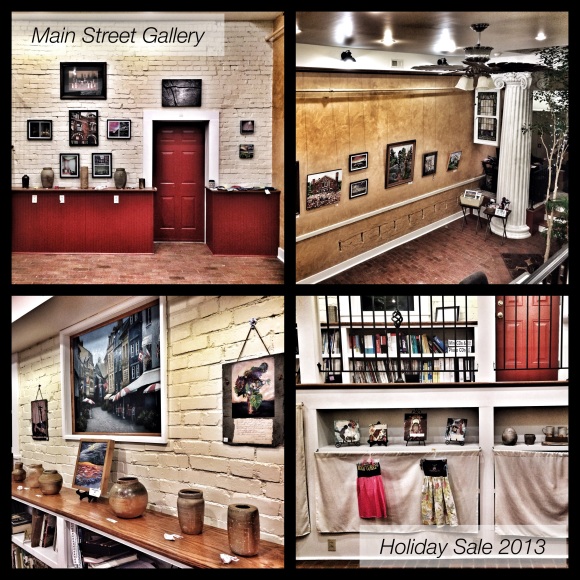 Love your city. See it in a new light every day. 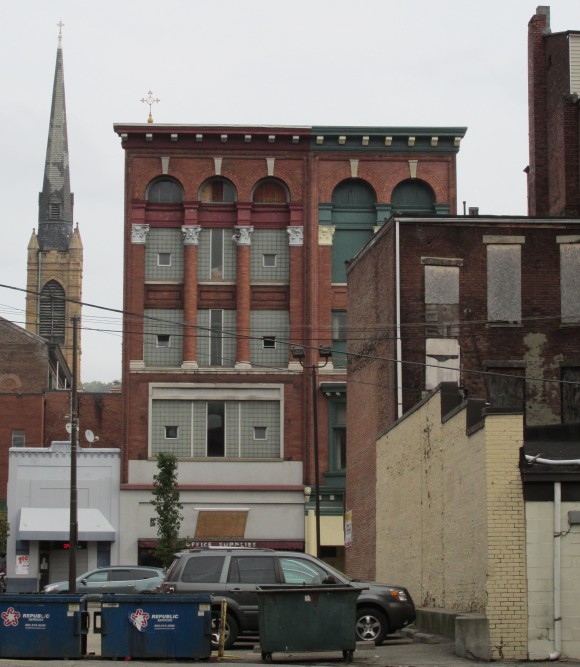 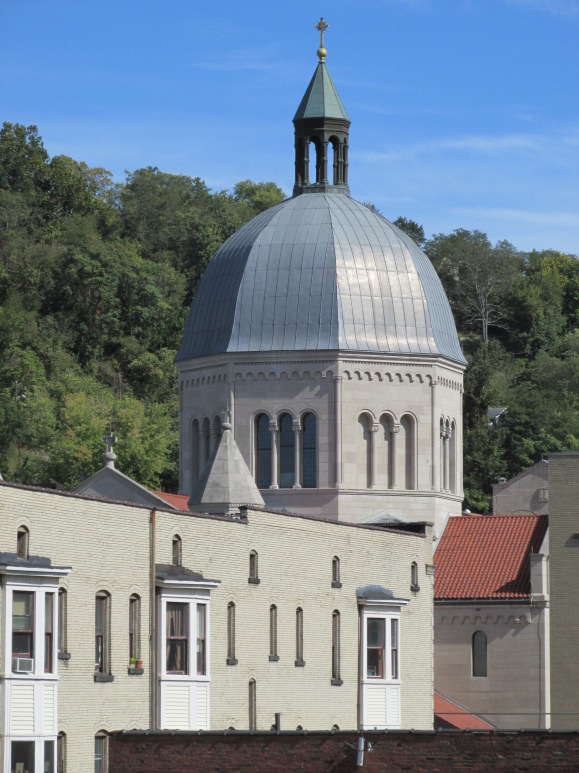 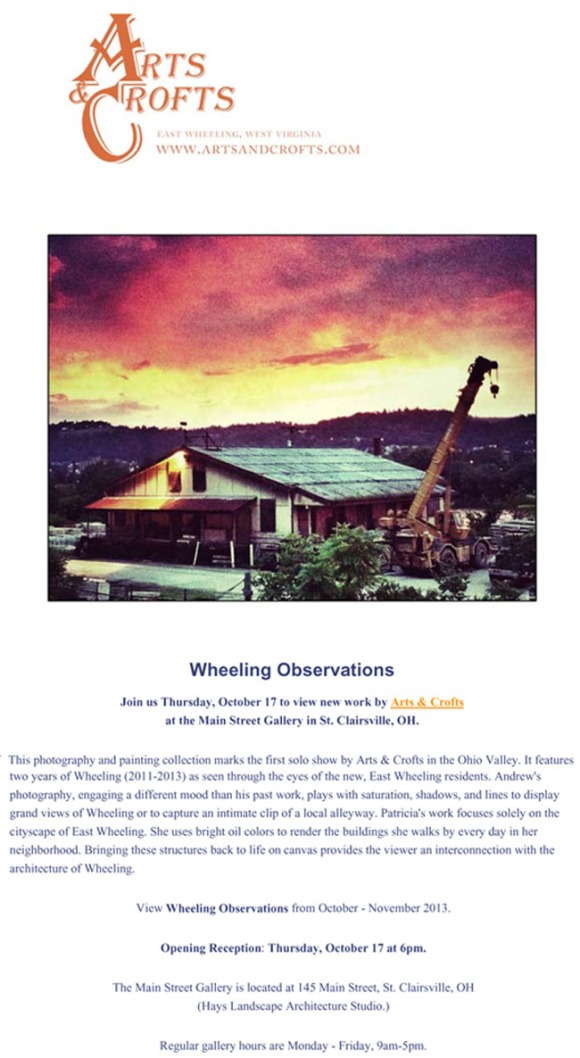 This event begins tonight, October 17th, at 6:00. Enjoy refreshments and new works from two of the founding members of the gallery. Share the poster with you friends. We look forward to seeing you!

The East Wheeling Wednesday Farmers Market is trying to get ‘The Word out On The Street!’ Word on the street was the theme a few months ago. This week, below, colorful banners flew across the road signaling passersby to stop. The event challenged attendees to ‘Bitter Sweet Tie Dye’ their clothes. The corner is a creative force in the neighborhood that brings children and adults together.

Black Swan Organics is the driving force behind the stand. A few years ago, when Danny Swan began farming the green areas in the neighborhood in need of care, the area began to flourish. He’s determined to bring affordable, healthy food to those people who have no other place to turn for groceries within a close walking distance beyond the corner convenient store.

These weeks before Halloween the stand is flourishing with pumpkins, dried corn sprays, and gourds of all sizes. The orange explosion is hard to pass by. I encourage you to visit the stand every Wednesday that you can from noon to 7!

Join Main Street Gallery this Thursday as we host The Crofts!

The event begins at 6:00 the evening of October 17th. Enjoy refreshments and new works from two of the founding members of the gallery. Share the poster below with you friends. We look forward to seeing you!

I was happily surprised to discover that the family of Narcisi Winery has roots that come from the same town my great-grandparents were from!

~ Giulianova in the Abruzzo area of Italy ~

I attended a wedding shower here this past spring. The winery resides in a lovely setting in Gibsonia PA, just north of Pittsburgh. Learning about where the Narcisi family was from is a coincidence because my family will be traveling to Italy next year to find our relatives. The task is taking longer than I anticipated. Our family name must have been changed from Campetti to Competti at some point. My great grandmother’s family name was Stellarini. I’ve contacted the Registration Office, or the ‘Ufficio Anagrafe” of Giulianova to try to find records of my grandparent’s siblings. My idea is that I can trace down lineage to find someone we can visit today! If anyone else has any ideas to offer I’d love to hear them!

~ The lovely seaside community of Giulianova ~ 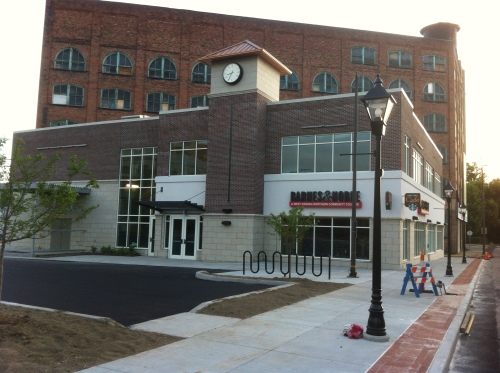 Barnes & Noble booksellers and West Virginia Northern’s latest improvement to downtown Wheeling has created a necessary connection for the city.  This renovated building proves to be the necessary link between business and culture, as it is situated between the downtown business district and historic Center Market. Since it’s opening this past summer, it has continued to generate recognition for the college as well as SMG Architects. Creating a quadrant that saddles a busy intersection, WVNCC has enabled one more beautiful area for passersby to admire. The campus stretches from Main Street to Eoff Street, and can be enjoyed from the green and lively plaza beneath the façade of the prestigious B&O building, the campus’ main building.

Thanks to Julie Doerr for every one of these lovely photos!

I may have been the first customer too, as suggested in the above shot.

The lower level serves the public as the upper space is reserved for students. 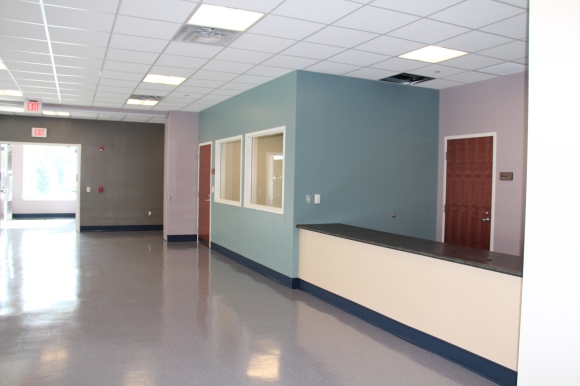 The upper floor was designed to be used as a secondary service counter during the college’s busiest times, and at the start of each semester.

Enjoy a cup of coffee while watching the streets at this high bar located at the ground level. 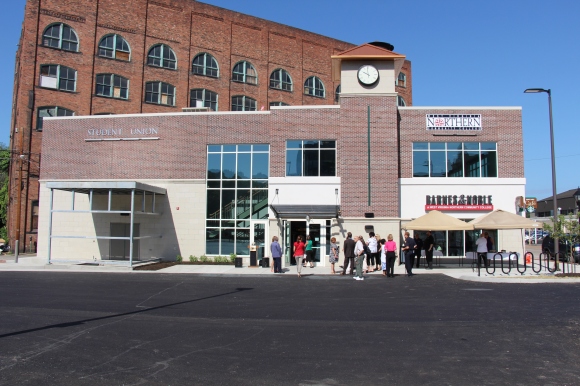 Things ‘Perking’ Up In Town

It has been another great week of restoration and revitalization in Wheeling.

Kudos go to West Virginia Northern Community College for repurposing and revitalizing another corner of 16th and Market streets in downtown Wheeling.

Congratulations and thanks also are extended to the Wheeling chapter of the Daughters of the American Revolution and its partners, the Wheeling National Heritage Area Corp. and the Wheeling Park Commission, for spearheading the restoration of the historic Madonna of the Trail monument along National Road.

The week began with the much-anticipated opening of West Virginia Northern’s latest facility on the southwest corner of 16th and Market streets, featuring a combination Barnes & Noble bookstore and Starbucks shop on the new building’s first floor and the college’s student activities center on the second floor. Public officials, civic leaders and other guests joined college representatives for a ribbon-cutting ceremony and grand opening of the new facility Monday, July 15.

Wheeling architect Victor Greco, who also is the genius behind the transformation of the intersection’s northwest corner for Northern’s new Applied Technology Center, noted that his design for the new bookstore-student union picks up architectural elements of Northern’s historic B&O Building located across the street. Greco explained that the new facility’s clock tower is a historic nod to a clock tower that once stood at the former B&O Railroad station. The architect added that he wanted the new clock tower to create a piazza-like look for the plaza area adjacent to the center’s entrance.

As with the Applied Technology Center, the new building’s copper accents complement the copper trim on the roof of the B&O Building, Greco pointed out.

For many years, a large building on the intersection’s southwest corner was occupied by a bank until that institution moved to a new facility out the pike in the 1970s.

Later, a Winky’s restaurant operated in part of the building for a time. Eventually, the vacant former bank building was razed. More recently, the corner lot was occupied by the Straub Hyundai sales office until the dealership built a new complex at The Highlands.

July 21, 2013 by Linda Comnis at The Intelligencer / Wheeling News-Register

–An article that ran before the event:

The structure, once home to a Straub Hyundai car dealership, will also house a Barnes & Noble Bookstore and coffee shop on the first floor that will also serve the public.

Construction on the $2.1 million project began last September. In addition to local, state and college officials, representatives of Barnes & Noble also are expected to attend the event.

On Friday, there was a flurry of activity at the site with men working quickly on paving the parking lot, installing signage and lights, and laying tile inside and brick on the sidewalks outside. Workers also could be seen putting the finishing touches on the bookstore and its offerings.

Lash Paving of Colerain workers said they would finish laying the base coat and then install the top coat of pavement today on the parking lot. Fresh landscaping also is expected to be planted around the building in preparation for the outdoor ceremony at 10 a.m. Monday.

The Student Union building is located adjacent to WVNCC’s other newly renovated structure, the Applied Technology Center, which was the former Straub Honda dealership, at the corner of 16th and Market streets. That project cost $3.88 million and is expected to open for classes this fall.

Enjoy what Wheeling has to offer this Friday -it’s a First Friday!

A New Wheeling from Grindley Productions on Vimeo